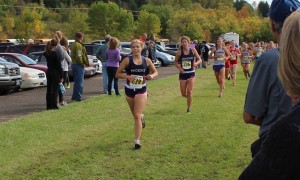 By Piedad Carrera and Teresa Schatz

They had a race up at the coast in Brookings and recently did a workout at Crater Lake. This year, the goal for both teams is to qualify for the State Championship. From the way this team’s been preparing, they won’t have a problem achieving this goal!

Last year, the girls’ team won the Oregon State Championships and the boys’ team finished as runner-up at State. This year at the Nike Portland XC event, the PHS Cross Country team placed 12th in the men’s 5,000 meter and 14th in the women’s 5,000 meter in the official team scores.

Our men’s and women’s teams both competed in the 5000 meter race. Both teams fought their hardest and succeeded with Robert Vos placing 17th, Emma Amundsen placing 8th, and Danielle Jantzer placing 19th in their divisions.

Their most recent meet was the Oxford Classic on October 2 in Bend.

Be the first to comment on "Phoenix XC Travels to Portland"